: : Remember the good old days when a night on the town might have involved taking in a Polynesian floorshow at a local exotic nightspot? Grass skirts, drums, dancing… the whole bit? Well, after years of pining for this form of entertainment that has not graced our city since the long gone heyday of Polynesian Pop Culture (well, at least since the loss of the Jardin Tiki’s now defunct Friday Night Luau), I recently had the chance to experience a Polynesian dance performance that was more authentic than anything any local Tiki joint could have ever slapped together for the weekend crowd. The performance was actually as good as (and definitely on a larger scale than) the Mai Kai’s Polynesian Islander Revue, one of the very few well-done Polynesian dance shows I’ve had a chance to see... : :

: : This past March 11th, I took in the second of two Montreal performances by Les Grands Ballets de Tahiti – a Polynesian troupe made up of some 30 dancers, musicians and vocalists – who made their way over to our side of the big lagoon carrying steamer trunks filled with colorful costumes and exotic accessories. The troupe performed in a 3000-seat theatre at one of the city’s premier arts venues, Place des Arts. : :

: : In its present form since 1998, the GBT troupe has been a frequent winner at cultural festivals – such as the Heiva I Tahiti – in their homeland, and they have also performed their brand of Tahitian dance – or ori – before crowds throughout Polynesia, in Europe, the Orient, and the U.S. (appearing before a crowd of 18,000 spectators at the Hollywood Bowl). : :

: : The show presented here in the troupe’s two Montreal performances (and one show in Quebec City) is called The Legend of Princess Hotuhiva. It’s a Tahitian love story of course, about Hotuhiva, who flees her island home (hidden in a drum!) when her tyrannical father promises her in marriage to a man she does not love. Luckily for Hotuhiva, she happens to be one heck of a dancer… so good in fact that the god Tane falls for her. : :

: : GBT press material tells us that in Polynesia, every aspect of existence can be expressed through dance. To be honest, when I read that the GBT would be bringing together the traditional elements of dance, percussion and song with a more contemporary approach to choreography and stage direction, I was a little worried that the show would turn out to be a Tahitian version of Up With People. Had the show started with the one song the troupe performed as an encore (a sort of audience clap-along thing), I would have been right. However, thankfully, my worries were soon put to rest as the performance opened with a brief French voice-over narration that provided a synopsis of the plot before moving on to a completely traditional show featuring Tahitian-only lyrics and dialogue. The vocalists and musicians (I counted four ukuleles during certain songs!) performed music that ranged from beautiful and melodic traditional sounding pieces to a few songs that recalled what could almost be referred to as American-style exotica (it was a pleasant surprise to hear one song in particular that featured a background chant that was quite Baxter/Denny-esque). The rapid-fire drumming and percussion that accompanied many of the faster dances set the entire theatre rumbling. And the dancers! Strikingly statuesque yet fearsome men… and beautiful women whose hips would suddenly go from a graceful sway to a mile-a-minute side-to-side shake… : :

: : The show’s promoter informs me that the GBT’s Montreal and Quebec City shows were a sort of test run for a possible larger North American run of performances. Judging by the extended ovation at the end of the performance, with many of the members of the troupe visibly moved to tears by the audience reaction, Les Grands Ballets de Tahiti will certainly be back soon… : : 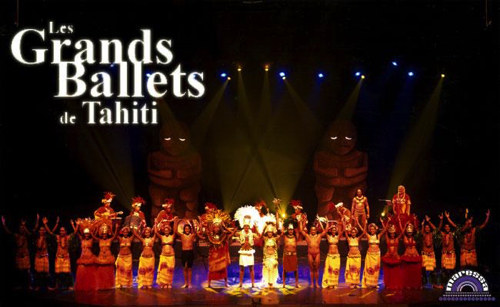