KING OF THE JUNGLE

: : Like most tourists, I’d certainly heard of Elvis’ infamous “Jungle Room” before finally making the pilgrimage to Graceland this past fall but still, nothing could really prepare me for a room full of Tiki splendor as envisioned by the King of Rock ‘n’ Roll himself. The Jungle Room hits you just about a third of the way through the Graceland tour. You’ve just come up the stairs through the plush basement pool room—a pantheon to bad taste covered wall to ceiling with 400 yards of pleated fabric—when suddenly, there you are: standing in front of the Presleys’ buried South Seas treasure. : :

: : For the Tiki aficionado, the Jungle Room is truly a sight to behold. Originally just a screened-in porch in back of Graceland, Elvis had walls built in the 1960s to turn it into a den, installing a custom stone waterfall in the west wall. It wasn’t until the 1970s that it became a full-fledged exotic Tiki pad with the addition of a bar and several pieces by William Westenhaver, whose Witco furnishings epitomized Tiki home décor throughout the 60s and 70s. Legend has it that Elvis noticed some Witco furnishings while driving past a Memphis furniture store, stopped, and cleaned them out. Although it clearly owes more to 70s Tiki than to the original 50s boom, the Tiki vibe is still overwhelming, with the bar and Tiki mask-carved stools dominating the eastern end of the room, while a small sitting area including carved chairs and polyurethane-coated cypress tree trunk tables are seen to the west, by the waterfall. : :

: : For Elvis, though, this little slice of paradise was often anything but. The waterfall was a frequent source of problems, supposedly flooding nearby rooms and almost burning the estate down when it shorted out during a Christmas party in the early 1970s. It is also the site of Elvis’ infamous (if accidental) TV shootout, provoked by an especially noxious Robert Goulet special. Still, the Jungle Room remained one of Elvis’ favorite areas of Graceland, the site of numerous music rehearsals due to its acoustic qualities, as well as home to some of the King’s final recording sessions for the albums “From Elvis Presley Boulevard, Memphis, Tennessee” and “Moody Blue.” : :

: : Not surprisingly, of all the distinctively designed nooks and crannies in Graceland, it’s the Jungle Room that consistently makes the biggest impression on tourists. The overstated Witco style of the room is often easily written off as another example of the King’s garishness, but for Tiki admirers, it’s a great leveler; a reminder that, now and then, even Elvis liked to escape it all with a Mai Tai or two. : : 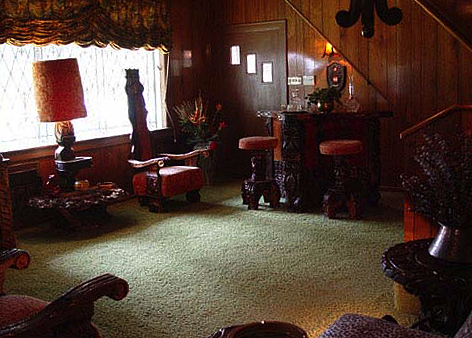 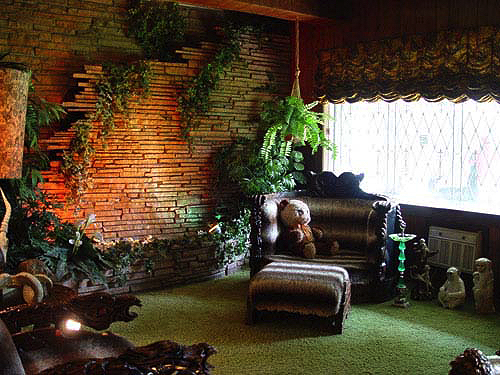