The Man of Steel

: : Mike Scott has been playing Hawaiian steel guitar for close to 60 years and is Canada’s foremost authority on the history of steel players and Polynesian music. In his lengthy career, Mike has performed in England, Canada and the US with such Hawaiian music greats as George Naope, Pua Almeida, Sam Makia and Hal Aloma. In 2001, Mike received the Hawaiian Steel Guitar Association’s “Man of Steel” award for his outstanding contribution to Hawaiian music. Mike is also an avid music collector; he currently has over 7,600 Hawaiian music recordings. He continues to perform today with his band The Hawaiianaires. : :

: : The following is part of a 3-hour conversation in which Mike talks about his career, the halcyon days of Hawaiian steel guitar, and long forgotten Polynesian bars. : :

Jo Bradley : : You have been playing the Hawaiian lap steel since the 1940s. What made you choose the lap steel and this type of music?

Mike Scott : : That goes back to when I was 16 years of age. I was in England at the time, and I went to the local theatre one Saturday. In those days, they played records in the intermission between the movies. One was a Hawaiian record, and I had never heard this sound before. I was so intrigued by it, I sat around for 3 hours hoping they’d play the record again – and they did! I was completely sold. After the movie, I went to the music store and asked them about this record. They had it, so I bought it and that started the whole thing going.

MS : : Funnily enough, it was “In the Mood” played by Mel’s Hawaiian Serenaders, an English group popular during the war. The steel player was Roland Peachey, a French-Canadian fellow from Montreal. He played a lap steel with 3 necks of 8 strings – he went over to the UK in 1938 for the coronation and musically took the UK by storm – they’d never seen a steel guitar like that.

JB : : Is there one particular tuning for steel guitar?

MS : : There are about 200 different tunings. Personally, I favour the E6 tuning, and use the pedals to give me the 7th. If you have a pedal steel, the pedals eliminate the need for most of the bar slants. Hawaiians use the C6 or E7 tuning – they change the tuning a lot to make the songs easier to play.

JB : : When you play Hawaiian lap steel, are the chord progressions similar to those used in country music?

MS : : There are quite a lot of chromatic changes. Harmonically, there are differences in Hawaiian music, it is still a type of popular music but it has a few twists in it as well. It has to have a nice flow. I was approached a couple of times to play country music but I always said no – I didn’t want to dilute my style, so I stuck to Hawaiian. I’ll play standards, yes, but not country. There are lap steel players in country groups that play Hawaiian music but they are country players. You can tell they are country players – they use different tunings and techniques.

JB : : In the 1950’s you moved to Canada. Was there much interest in Hawaiian music here at that time?

MS : : The Royal York Hotel in Toronto brought in a lot of shows from Hawaii in the early 60s. When Hawaii had become a state, it sparked interest in Canada as well as the U.S. Even Hank Snow did a Hawaiian album. In fact, Hawaiian-born steel player Ben Hokea taught at Heinzman’s music store on Yonge Street in Toronto. Ben did a lot of recordings in the 20s for the Canadian HMV/Victor label and even played at Massey Hall. Years afterwards he moved to Montreal and continued to play there.

MS : : Well, there were a lot of touring acts, mostly duos made up of a Spanish guitar player and a steel player. They would leave the islands and do the vaudeville circuit. These guys would play all over; then, eventually, they’d settle somewhere and not go any further. They’d stay and teach ‘cause there was a demand for it then. This Hawaiian migration started about 1905.

JB : : A few years back, I found 2 used records, one by Mel Abe and the other by you, on Maple Records. Can you tell us anything about this Canadian label?

MS : : Tom Shilstra ran this label that put out Hawaiian records almost exclusively. They weren’t all recorded in Toronto, some were just compiled here. This Hawaiian record series consisted of 16 records, 2 of which I recorded. Another fellow named Ken Upton did one of the Maple Records recordings as well – he is still around, living in Brampton (Ontario). Tom Shilstra spent the last 10 years of his life working on Maple Records – he died in 1987 and, when that happened, the label fell apart.

JB : : You have an enormous collection of music here. Do you have any interest in Exotica music, like Martin Denny?

MS : : Yes, actually I have a lot of Martin Denny recordings. In fact, I saw Martin Denny in 1964, when we went to Hawaii for the first time. There was an amphitheatre there and a friend of ours took us to see Martin Denny. Denny was there, playing piano with all these guys around him making those weird bird noises – it was very good.

JB : : I love those jungle sounds. The musicians in the band, did they use whistles to produce those noises?

MS : : The guys in the band did most of it themselves; most were vocal utterances that they came up with. They did do some of it artificially. I also had the pleasure of seeing Arthur Lyman. There was this TV show called Hawaiian Eye that starred Connie Stevens and a lot of it revolved around the Shell Bar – Arthur Lyman and his band played in the show. I thought it was all Hollywood, that the place didn’t exist, but when we went to Hawaii in ’64 there was the Shell Bar and there was Arthur Lyman playing! He was the softest vibes player ever. Beautiful sound.

JB : : Your band, The Hawaiianaires – do you still have the same members after all these years?

MS : : Jimmy Nolan, my singer, died back in 1987 of leukemia at the age of 47. He had a great voice. Paul Butler has been on keyboards for 36 years. Tony Quarrington, [a fixture on the Toronto jazz scene and session guitarist – Ed.] joined us about 15 years ago. Have been through a few drummers... At one point I did about 80 shows a year, now I’ve slowed down and do only about 30. I recently performed at the 2004 Microsoft World Conference and I’ll be going to New Zealand in January to play as well. Actually, I just got back from Hawaii a couple of weeks ago. Tony Quarrington and I were working on a new recording. We recorded it at Greg Sardinha’s studio in Kailua, that’s on the windward side of Oahu. We laid down about 30 tracks, but it won’t be released until the fall of 2005. There’s a lot of work to be done yet.

JB : : Can’t wait to hear that! I know that you have played at the Hawaiian Room in the Lexington Hotel, the Luau 400 in NYC, the Royal York, the Banff Springs Hotel, as well as numerous other venues. Can you tell us about some of the long lost Canadian Tiki bars where you have performed over the years?

MS : : There used to be a great place up in Kitchener (Ontario) called the Waikiki. We played up there on and off for 7 years. It was owned by Norman Mui from Hong Kong. He had this place and he set it up nice – you walked in over a little bridge with a miniature lake complete with fish. The place seated 200 people and was filled with palm trees and blowfish lights. We used to go up and play 3 times a year plus a New Year’s Eve show with a 4-piece Polynesian dance troupe. That was from about ’67 to ’75.

JB : : Did you find that the interest in Tiki bars started dying off around ’75?

MS : : No, what happened was they put a highway bypass behind the place and Norman knew he was going to lose most of his passing traffic. So he sold it to a Chinese syndicate that put in a smorgasbord. It didn’t work very well and in the end they had a very profitable fire. The Waikiki is completely gone. I think there’s a gas station there now.

JB : : Did you ever play at the now defunct Toronto Trader Vic’s?

MS : : We actually played at the opening of the bar. Trader Vic and his wife came up from California for the event – that was sometime in the 70’s. It was a popular place, but a bit expensive. As far as other Canadian venues, we played at the Kon-Tiki in Montreal in 1958. The thing I liked about that place was it had a beautiful waterfall right over top of the bar. My band also played the Bali Ha’i Room in the Ports o’ Call on Yonge Street in Toronto. It was a beautiful club that had a complex of 5 theme restaurants under the same roof. The rooms were French, Country & Western, Roman, German, and Polynesian, of course. The Bali Ha’i had a huge boat moored up to a quay in the water and the band played in the boat. You could sit on the boat or on the floor of the boat. It was all roped up so you couldn’t fall into the water. There was no motion as the boat was fixed to the floor. It’s all gone now – they wrecked it and built condominiums.

JB : : I have a menu from a place in Toronto called “Doc’s Place”. Do you know where that was?

MS : : It was part of the Town & Country restaurant, located downtown near Church and Wellesley. It was an interesting place, part Polynesian and part African. There was another place in that area that opened up in the mid 80s near Maple Leaf Gardens called the Hulakai. We worked there for a while but it didn’t last long as there were 5 partners and they couldn’t agree. One of them had his hand in the till. The building still exists but the bar is now called Zippers.

JB : : Why do you think that the Tiki lounges in Ontario died out?

MS : : All over North America, the theme restaurant/nightclub fad died out, it wasn’t just the Polynesian theme bars. Maybe people just got tired of it.

JB : : Why do you think that all things Polynesian are making a resurgence?

MS : : I think that this new generation hasn’t been exposed to it and they like it. People are looking for alternative types of music because rock has been around for a long time and a small proportion are going to be interested in Polynesian/Hawaiian music. The Tiki room and decor goes with it. It is a pretty elusive type of concept, I think. I think it’s something you can’t pin down. I know that things cycle. I think the scene is beginning to come back, but hopefully it won’t become a real craze, then hit a peak and drop off again. A nice steady interest is better – I think that’s why Hawaiian music has lasted so long. In the 30s, due to the Dorothy Lamour movies, record sales for Hawaiian music hit a peak just before the war, then died off again. Now it’s hit a plateau, which is better than being a fad. It’s a shame that most of these rooms have been lost. But then someone say’s, “Hey we are losing something good here.”

For further information on Mike “Malahini” Scott & the Hawaiianaires: 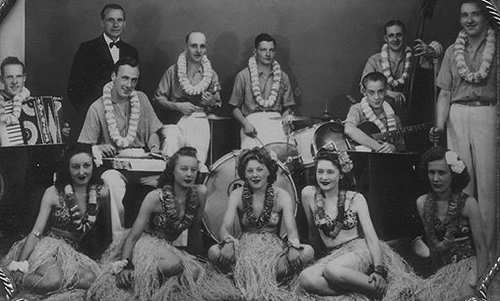 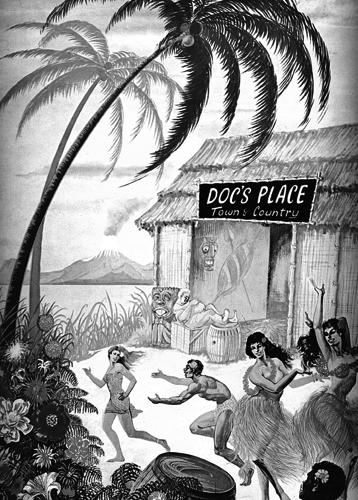