: : It had been a decade since my last trip to visit my sister and brother-in-law in Vancouver but this past April 27th to May 3rd, I did my best to soak in the bits and bobs of Hawaiian lore that have drifted across the Pacific to Canada’s West Coast. : :

: : With Vancouver being on the Pacific rim (and in “relative” proximity to Hawaii), I assumed that Tiki culture would be more pervasive than it is in the city. Sure, there’s a Tiki section at Cheap Thrills, an alt-rock shop downtown, and Hawaiian shirts are cheap and plentiful (relative to Montreal’s friperies and second-hand stores anyway) but the city’s compulsive habit of tearing down and building up has killed many a classic Polynesian haunt, notably Trader Vic’s (1961-1996). However, Heritage Vancouver has stepped in to save the Tiki rooms at the Waldorf Hotel, the city’s oldest Hawaiian hotspot. : :

: : Established in 1954, the hotel is located on East Hastings, well past the infamous drug ghetto but essentially in the middle of nowhere. Unfortunately, the rooms aren’t generally open to the public, but they are available to rent for special occasions, such as anniversary parties or burlesque rock shows… and preparations for both of these events were underway the day I dropped by the Waldorf. : :

: : At the bottom of a bamboo-lined spiral staircase, the long dining hall – its walls stacked with thick bamboo, its ceiling thatched, hut-style – was arranged for the older folks. Meanwhile, a band was sound-checking next door in the sprawling bar, decked out in lurid murals of Polynesians in the surf, dark brown, richly detailed columns, a blue dome ceiling that simulates a starry night sky, and lush (fake) greenery, including nearly ceiling-high palms. : :

: : Clearly, there were no beverages being served, so we ventured back to North Vancouver for happy hour at Raglan’s, the intimate, modern Tiki room conveniently located right across the street from my sister’s condo. There was a band sound-checking there as well, on a small stage directly above the bar. On the walls, six cocktail menus were beautifully written and drawn in chalk, each one framed with bamboo. Along with the classics – Mai Tai, Zombie, Singapore Sling – the bar offered its own creations, such as The Grass Skirt, Mango PI, and Elvis in Hawaii, all served in tall, frosted glasses with fresh fruit and umbrellas, a tropically refreshing way to end a hot West Coast afternoon. : : 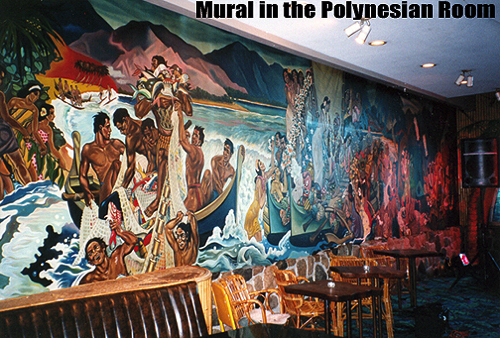